Triple Echo is the ‘zine I published from 1999 to 2003 and, incidentally, the original name for this web site. I hope to put up the entire run in due time, but here are the issues available thus far. 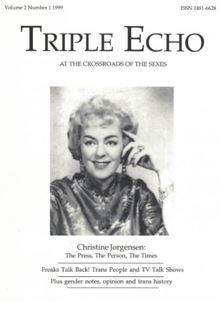 Volume 2 number 1 1999 has a number of articles on trailblazer Christine Jorgensen. Jorgensen may not have been the first to transition, but she was certainly the most famous. It’s hard to imagine anyone handling the publicity with more grace than she did. 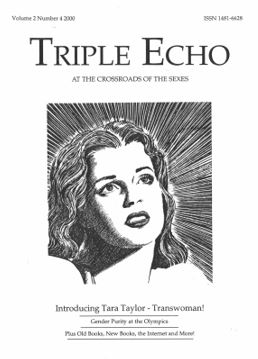 The first episode of ‘Tara Taylor – Transwoman!”, my attempt at a graphic serial. It had so many possibilities to deliver social satire, commentary and criticism from a trans perspective. Oh well. Maybe a talented trans artist can take it a step further and resurrect it into a graphic novel sometime.

There’s other good stuff in this issue too. I used to buy old sexology books whenever I could find them and I condensed their stories on trans folks in an article called ‘Tall Tales and Old Warriors’. “Old books on sexual behaviour are fascinating historical documents,” I wrote, and this issue of Triple Echo can now be regarded the same way. So much has changed for trans folks since this was published. 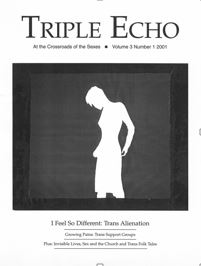 The cover story to volume 3 number 1 is an exploration of the alienation most trans people feel. I reread it before uploading and think it’s still relevant 20 years later. This issue also contains episode two of  Tara Taylor, Transwoman! who was involuntarily subjected to “transgender corrective surgery” by a virulently transphobic society, but who in this episode is finding herself again and recovering her will to fight. It was a great idea for a story, but suffered from a fatal flaw: I can’t draw! It was a failure, in other words, but an inspired one. 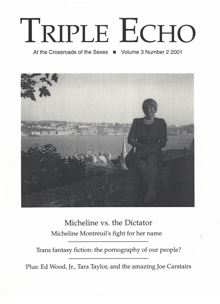 This issue is what I hoped the ‘zine would be, but which I achieved only rarely. It has a mix of reporting, history, personal stories and commentary.

Contents include Micheline Montreuil’s battle with Quebec’s Registrar of Civil Status to get her name changed, a piece on Ed Wood, and an opinion piece on trans fantasy fiction, “the erotica of our people”. 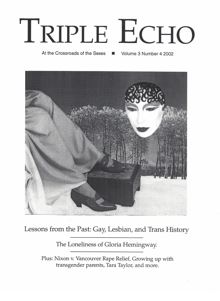 My friend Rachel Steen had a big impact on the look of Triple Echo through the collages she put together for me. Some of these illustrated articles, but mostly I just let her do her thing. The cover of this issue is one of my favourites, but the black and white reproduction didn’t do justice to her art. (Here is some of her work in colour.)

There are good stories in this issue too, including one on gay and lesbian history and what trans folks could learn from it. Also, did you know Ernest Hemingway’s born son was trans? Unfortunately, and perhaps not surprisingly considering the times she lived in and whose daughter she was, hers is not a very happy story. 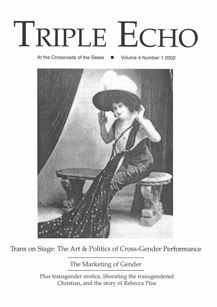 Volume 4 number 1 2002 has a lengthy piece on the art, politics and history of cross-gender performance, as well as a mix of trans history, news and book reviews.