Torrey Peters’ novel Detransition, Baby is nothing if not a deep dive into what it means to be trans. It’s somewhat remarkable that she manages, without derailing the book’s narrative, to explore in various depth of detail: racial and gender passing, trans “chasers”, detransition, autogynephilia, women’s roles, trans femme misogyny, facial feminization surgery, how cis people treat trans folks, suicide, HIV, and sex. Plenty and plenty of sex. What keeps it all afloat is Peters’ psychological insight into how people behave. This depth of characterization makes the reader want to know what happens next, a sure sign that Peters has succeeded in her primary job as a novelist, which is of course to tell the story. 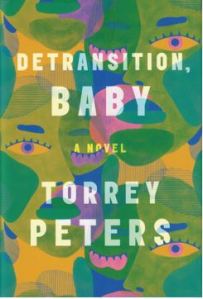 The plot itself hangs on a fairly preposterous idea. Reese, the main character, is approached by her ex-lover Ames with a proposition. Ames detransitioned from being Amy and has just made his current lover pregnant after believing himself to be sterile from the estrogen he’d been taking. Freaked out over the idea of being a dad, and knowing how much Reese wants to be a mom, he suggests Reese help raise the future child as another mom in an as yet undefined family relationship. He hasn’t told his pregnant lover Katrina about his plan yet, to which Reese responds, not surprisingly, “You come up with the most fucked-up shit.”

Peters makes all this believable by relating the back stories of each of her central three characters. Soon the preposterous idea starts to sound less preposterous, as a theme of motherhood works its way into the book through the characters’ lives. Here’s where Peters’ strength as a novelist shines. We know these characters by the end of the story and care about what happens to them, despite them not always being likeable. Indeed, one of the people in the novel for whom I often had little patience was Reese, the trans woman at the centre of it, who seemed always to find it hard to do the right thing.

Peters, however, is as fearless in how she depicts her characters as she is in wading into controversial territory. A trans woman writing about cis female sexuality may as well be painting a target on her back, and indeed after being nominated for the Women’s prize for the novel, Peters was targeted by a group called the Wild Women Writing Club, who (anonymously) called the novel “misogynistic” and “a work of sissy porn suffused with hatred of women”. Detransition, Baby requires a more careful reading than they were obviously willing to give it. There’s a line in the book that explains this, and indeed much of the transphobia directed towards trans women: “A nimble mind can always uncover the politics to justify its own selfishness.”

Besides her psychological insight, Peters has a knack for delivering an arresting phrase that will make a word loving reader smile. Detransition, Baby is an accomplished piece of fiction.

The Ottawa Trans Library is located at 1104 Somerset St. W. in Hintonburg. It is a lending library of trans books and material, and a community space for trans and gender non-conforming people, as well as the LGBTQ+ community. Hours are: Saturday and Sunday 12 to 5, Monday, Wednesday and Friday 3 to 7.