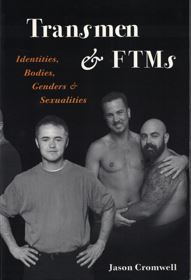 well written and well argued books by trans authors have been published in the last decade. Transmen and FTMs: Identities, Bodies, Genders and Sexualities is another worthwhile volume to add to the collection.

In part, the book is a review of the literature that has defined what it means to be trans, which means of course that it reviews what the medical and academic communities have been saying about us. Specifically, it examines the definitions of transmen and how these definitions have differed from those of MTFs.

The few studies that have considered female-to-male transsexuals have concluded that they are a homogeneous group; reported them to have stable identities as men trapped in women’s bodies; presented them as androgynous in appearance and behaviours; identified them exclusively as heterosexual; and described them as being obsessed with having penises.

Cromwell methodically deconstructs these definitions and replaces them instead with definitions that transmen live by. These definitions “are nonmedical, nonpathological and noncolonizing. They are affirming, positive and reflective of trans experiences and the lives people choose to live.”

One of the chief problems over the years has been the relative invisibility of transmen. For many years, much of the literature stated that FTMs don’t exist, that there is no such thing as a female transvestite or that FTMs are butch lesbians These arguments proved to be doubly effective for not only did they silence the voices of transmen, they could also be used as an excuse to pathologize transwomen. Janice Raymond’s argument against MTFs. in The Transsexual Empire were predicated upon the invisibility of FTMs, whom she called “tokens”.

The ways in which FTMs have been rendered invisible are numerous. Female gender diversity has not historically been closely observed because what women did was not considered important. Lately, as feminist scholars have been delving into women’s history, female gender diversity has been used for political purposes. Both Julie Wheelright, in her book Amazons and Military Maids, and Diane Middlebrook, in her biography of Billy Tipton, were incapable of acknowledging that the female bodied people they were writing about may have been transgendered; The conventional explanation, so easily arrived at and so much more useful than transgenderism, is that they were living as men in order to attain male privilege.

Cromwell is especially critical of Middlebrook:

Middlebrook’s random usage of male and female pronouns and dismissal of Tipton’s lifestyle as mere performance denigrate Tipton (and irritate readers). She tentatively suggests that Tipton may have been transgendered and may have identified as a man yet dismisses both possibilities. In any event, her arguments fall short and are nothing but dubious conjecture. She admits that her account is, at best, speculative when she states, “We will have to substitute imagination for absent documentation. Perhaps what happened went something like this”. From that point on the text becomes little more than fiction.

Cromwell points out that, in Tipton’s case, male privilege is hardly an adequate explanation for spending fifty years living in fear, hiding from loved ones, taking extreme measures to make sure no one knew what his body looked like and then dying from a treatable medical condition (a bleeding ulcer). Some privilege.

Female bodied trans people are thus denied their history. By contrast male bodied trans people have been relatively well documented and even if that documentation was frequently done for less than benevolent reasons, we at least can put names and dates to much of our past. “Neither men nor women claim Christine Jorgensen, Renee Richards, and other male-bodied transpeople as part of their histories.” Yet Tipton’s life, like the lives of so many other transmen, has been absorbed into women’s history. In an otherwise calmly rational book, there is a perceptible note of anger lurking beneath Cromwell’s exposition of the way transmen’s life stories have been appropriated.

Justifiably so. Appropriating transmen’s history is undoubtedly a way of rendering transmen invisible and of denying their existence. Cromwell provides his own FTM history as a kind of compensation, but however well meaning this might be, the stories are too sketchy to be useful. Most of the transmen he mentions will be already familiar to anyone who has read Leslie Feinberg’s Transgender Warriors. A true history of transmen, written by a transperson, would appear to be a vital step in ending FTM invisibility.

Much of the book is also a discussion of language. It is not just that the mainstream pathologizes gender diversity through its choice of words – what else is new? – but that most conventionally gendered people simply do not have a concept that transpeople’s identities are real. Passing, for mainstream observers, involves deception, but for many transpeople the deception occurs when they attempt to live in their assigned sex (I have lost count of the number of news items I have read that claim Brandon Teena was “masquerading” as a male.)

This question of language is an extremely difficult one. Transpeople are such varied mixes of identities, bodies and sexualities that we defy conventional categories. Yet the language used to describe us always assumes a nontransgendered paradigm and inhibits the understanding of who we are.

Part of the pleasure of Transmen and FTMs is its brevity. Including notes and bibliography, it is only 192 pages and yet it effectively captures the breadth of the FTM experience. While its focus is often on the important differences between FTMs and MTFs, ultimately it is a book for all of us:

So long as medico-psychological practitioners control the discourses about trans subjectivity, and as long as transsexuals remain complicit, the binaries remain seemingly intact. Once transpeople begin articulating their own transsubjectivities, however, new discourse, and thus the expansion of binaries, can begin.

A Salute to the Kinks

Who Do You Think You Are? A History of Trans Terminology