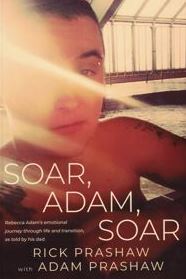 While Soar, Adam, Soar is very much about the short, inspiring life of Adam Prashaw – indeed, he contributes to much of it through his Facebook postings reprinted periodically within the text – it’s also about his dad and co-author, Rick Prashaw. I don’t think Rick intended it that way, but I also don’t think the book suffers for it.

Adam was born female and given the name Rebecca, although because his mom was certain he was a boy, his parents also made the surprising and prescient decision to name him Adam. As Rebecca, he suffered the first of his epileptic seizures at age 5. These seizures – called “atypical absences” because they result in a loss of awareness – lasted until he was 10, when mercifully they seemed to stop. Unfortunately, that was just an illusion. They resumed in far more serious and dangerous ways when Adam was 17 and seriously affected his ability to live a “normal, independent life”. Life goes on, however, and the challenges don’t stop. As Adam grew older he was also discovering who he was, first as a lesbian and then as a trans man.

While my initial interest in this book stemmed from Adam being trans, I learned a great deal about epilepsy and the debilitating effect it has on those who suffer from it. Adam reflected in a heartbreaking Facebook post in October 2011 on how great his life had been, but now “in hospital lots, can’t drive, not being able to go to college so losing friends, contact with people, always alone…things have just been miserable and I wish I could have what I used to have back.”

Adam had a second eight hour brain surgery in November 2015. The prognosis seemed good and Adam was keen to resume his transition, but he suffered another severe and unexpected seizure in January 2016 while he was in a hot tub and very briefly alone. The book’s cover photo was taken by Adam and posted just moments before he died.

I have read a number of books and articles written by the parents of trans youth. They often purport to have grown and learned something from their trans kids, but if indeed they had they did so with great reluctance. I found their attitude disingenuous and lacking in generosity. Beneath their veneer of acceptance was a lingering transphobia and a reluctance to give up the notion that they and they alone know what is best for their children. Their attitudes make me very uncomfortable.

There is none of that with Rick Prashaw. Adam’s challenges with epilepsy and his quest to become who he is presented Rick with challenges of his own, but he addressed those by educating himself. He’s always learning, and humble enough to admit that his kid could teach him something.

I read a churlish review of Soar, Adam, Soar in which the reviewer suggested the narrative was more “paternalistic than paternal”. Nonsense. Rick Prashaw’s first concern is that of any parent, keeping his child on the “straight and narrow”, making sure he takes his meds, protecting him from the inevitable irresponsibility of youth. He never dictates to Adam who he should be.

Rick Prashaw did not write this to be an instruction manual for the parents of trans kids, but in the way he conducted himself it could well be. He often admits he wasn’t perfect. What parent is? His fear was that Adam would face discrimination and that hateful people would hurt him, but as he says of Adam’s transition, “I don’t remember having to make a new decision to love him.” Oh, for all trans youth to have such parents.

Adam was surrounded by much love throughout his life, from his parents, his friends and co-workers, even the numerous members of the social services and medical establishment that treated his epilepsy and helped with his transition. Perhaps it is no surprise that the final chapter to Adam’s journey, that of organ donor. inspired a warm friendship between Rick Prashaw and the man who received Adam’s heart. It’s quite a legacy for a young trans man.

Once this dreaful winter passes, do spend a moment on Adam’s bench to “sit down, relax, enjoy”. It’s located in St. Luke’s Park off Elgin Street. https://tripleechoca.wordpress.com/around-town-5/

The Ottawa Trans Library is located at 1104 Somerset St. W. in Hintonburg. It is a lending library of trans books and material, and a community space for trans and gender non-conforming people, as well as the LGBTQ+ community. Hours are: Sunday 12 to 5, Monday, Wednesday and Friday 3 to 7.