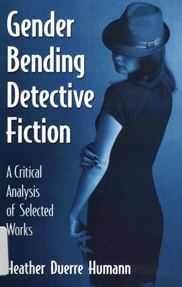 Gender Bending Detective Fiction is a hybrid book. It is both literary criticism of the detective genre and a look at how transgender people are portrayed in a selection of novels. The author begins with two of Mickey Spillane’s novels, I, the Jury and Vengeance is Mine, published in 1947 and 1950, and concludes with several contemporary authors who have managed, at long last, to create nuanced trans characters who are not lunatic killers or pathetic victims who have been murdered for the gratification of a cisgender audience.

Rendell’s novel A Sleeping Life, published in 1978 and featuring her Inspector Wexford character, completely embraces the “pervasive transphobia of its time”. It centres around the murder of a transgender woman, Rhoda Comfrey, who lived part of her life as a writer by the name of Grenville West. It is clear Wexford finds crossdressing behaviour distasteful, an opinion so transparently Rendell’s that the entire novel treats Rhoda Comfrey as deviant and somehow deserving of her own murder. “Indeed, before the novel’s close, readers become privy to every (so-called) transgression of this murder victim, while in stark contrast, her killer receives sympathetic treatment.”

Even Mickey Spillane’s novels, written in 1947 and 1950, are less repulsive than Rendell’s. Written at a time when women’s roles in the workplace were being debated, Spillane’s novels reflect “many of the cultural anxieties circulating during the postwar years about women taking over men’s roles.” Thus in I, the Jury the killer is a successful woman working as a psychiatrist with offices on Park Avenue. Over the course of the novel, Spillane’s character Mike Hammer finds himself attracted to her even as Spillane suggests she is subverting the gender roles of the time. (Her name itself is revealing: Charlotte Manning.) Hammer kills her in the novel’s denouement, thus “resolving the conflict that she poses as an object of desire and a threat.”

In Vengeance is Mine, the “symbolic phallus” of Charlotte Manning becomes real in the character of Juno Reeves. Juno is a trans woman who murders one of Hammer’s old war buddies. The interesting feature of this novel is that Spillane allows Hammer to be both aroused and repulsed by Reeves, which strikes me as being mildly risqué for 1950s America. “Juno Reeves is disruptive because Mike Hammer does not know what to make of her… As long as her gender identity – the source of his unease – remains a mystery to Hammer, he is unable to solve the novel’s other mystery: the identity of the murderer of Chester Wheeler.”

Vengeance is Mine is undoubtedly transphobic, but at least there is more going on here than Rendell’s simple minded transphobia.

While these novels are perhaps predictably transphobic, what to make of Val McDermid’s The Mermaid’s Singing? McDermid is a lesbian, but if you expected anything more enlightened from a fellow queer, you’d be disappointed.

McDermid is undoubtedly more politically conscious than most writers of detective fiction. While her books often examine issues of gender, identity and sexuality, the serial murderer in The Mermaid’s Singing is a trans woman. Surprise, surprise.

In her chapter on The Mermaid’s Singing, Heather Duerre Humann confuses McDermid’s narrative twist of having the trans woman murderer occasionally speaking for herself with some sort of break from a stereotypical portrayal of a trans woman. It is nothing of the sort. Through “her use of multiple narrative voices, McDermid offers readers a glimpse into the serial killer’s interior psychology, therefore presenting criminality from the perspective of a transgender killer”. It begs the question why specifically does this murderer need to be transgendered? What is it about her being transgendered that makes her a serial killer? Does Val McDermid answer either of these questions? Humann doesn’t say, but it is eventually revealed that our trans woman killer’s motive is that “she calls, stalks, and then kills men that do not return her affections.” It’s a plot only a transphobe could dream up.

Humann describes the many ways that McDermid critiques gender norms and gender roles in The Mermaid’s Singing, but these are limited to her chief characters, Dr. Tony Hill and his partner Detective Inspector Carol Jordan. The trans murderer remains a stereotype.

Overall, this is a dismal collection of either transphobic writing or featureless trans characters added only to spice up the narratives. Only at the end do we get a breath of fresh air with the fiction of Renee James. James is the pen name of a transgender writer. The two books analyzed here, Coming Out Can Be Murder and Transition to Murder, offer trans characters that are “dynamic, complex, and fully fleshed out.”

Of note also is J. K. Rowling, writing as Robert Galbraith, who in her book The Silkworm presents us with a trans character of substance who is not a murderer , and T. E. Wilson’s trans man detective Ernesto Sanchez. T. E. Wilson is a Canadian resident of Mexico and his creation straddles both cultures. He is based on an acquaintance of Wilson’s that he knew while living in Canada: “I knew Ernesto would be macho, fully anchored as a man, with a sexuality very similar to that of a traditional noir heterosexual. Suddenly, I had a character who could bridge both cultural and gender divides, while also driving a compelling narrative.”

A survey of detective fiction from the late 1940s to the present reflects the journey trans people have gone through in real life. Transphobic is too mild a word to describe what we’ve often experienced. Reading about these books can make one angry at past injustices, but it’s gratifying that the book ends with critiques of novels that portray us as real people. There is hope, my friends.

Gender Bending Detective Fiction is an interesting and worthwhile book for the lovers of detective fiction. It could have used a good editor, however, as it is at times grammatically awkward and often repetitive. A good editor would also have challenged Humann’s occasional assumptions that simply presenting a trans murderer in a different literary style challenges gender norms.

Gender Bending Detective Fiction is available for loan from the Ottawa Public Library.

The Ottawa Trans Library is located at 1104 Somerset St. W. in Hintonburg. It is a lending library of trans books and material, and a community space for trans and gender non-conforming people, as well as the LGBTQ+ community. Hours are: Sunday 12 to 5, Monday, Wednesday and Friday 3 to 7.